12 + 1 Ideas for exploring the Teruel area

This medieval town boasts an invaluable heritage of Mudejar architecture, part of which has been declared a UNESCO World Heritage Site.san-martin-teruel 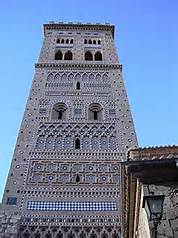 Although it is the least populated province in Spain with just 35,000 inhabitants, its backstreets offer endless visits and charming corners, with great architectural diversity.

Its tourist attractions include its spectacular Mudejar buildings: the Cathedral of the Diocese of Teruel, the Church of Santa Maria and the towers of El Salvador, San Martín and San Pedro, at the foot of which is the Church of the same name, also in Mudejar style.

Two other places of interest in the capital of Teruel are The Mausoleum of the Lovers of Teruel (from the legend of Isabel de Segura and Juan Martínez de Marcilla), from the Hotel we recommend the guided visit of the Mausoleum, Church of San Pedro and its tower as well as the Torico fountain, a great symbol and icon of the city.

This great paleontology theme park about the Age of Dinosaurs, located in Teruel, will delight both young and old. You will learn what life was like millions of years ago and discover the Aragosaurus, the first Spanish dinosaur, found in the village of Galve.

You will be impressed by the Turiasaurus Riodevensis, Europe’s largest dinosaur and one of the largest in the world, an extraordinary discovery made in the municipality of Riodeva.

Park Dinopolis is to be found in the Polígono Los Planos s/n in the Teruel provincial capital. Park information phone is 902 448 000.

Emblazoned houses, stuccoed architecture, its castle and its walls… Albarracín is one of the most beautiful towns in Spain, thanks to its magnificent conservation and the appeal of its architectural values.

The municipality has been a National Monument since 1961 and UNESCO has proposed that it be declared a World Heritage Site because of its beauty and the importance of its historical heritage.

Located in Nuévalos (Zaragoza), it was dedicated to Santa María de la Blanca and was classed as a National Monument in 1983. 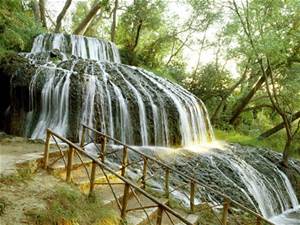 It is surrounded by the Natural Park of the Monasterio de Piedra, with calcareous massifs, which have suffered severe karstification, i.e. the dissolution of calcium carbonate in the rocks by the action of water, wind and ice.

Located near Valdecabras, in the province of Cuenca, la Ciudad Encantada is a natural area of calcareous or limestone rock formations formed over thousands of years.

Declared a Natural Site of National Interest in 1929, it is a spectacular example of how the erosion of wind, water and ice have been able to carve this karstic phenomenon.

Its origin dates back to the Cretaceous period, about 90 million years ago. 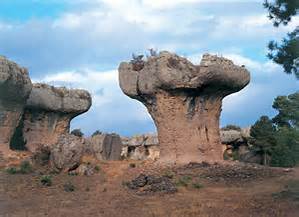 It is a personification of the river next to the symbols of the three provinces hosting the Tagus in its first few kilometres: Teruel (Bull), Guadalajara (Knight) and Cuenca (Goblet).

The Ciudad de los Corporales (Daroca) offers visitors a legendary and baroque look with its main street and off it the side streets that descend from the slopes of  the mountains of San Cristóbal and  San Jorge.

This city boasts a fortified site surrounded by walls, built between the 13th and 16th century and preserved almost in their entirety.

It is a veritable monument to water. Built in 1729, it is the largest artesian well in Europe and the source of the River Jiloca.

From this fountain springs a huge volume of water, 6,732 cubic feet. The elliptical parapet that surrounds the well was conceived in the 18th century by the Italian engineer Ferrari. 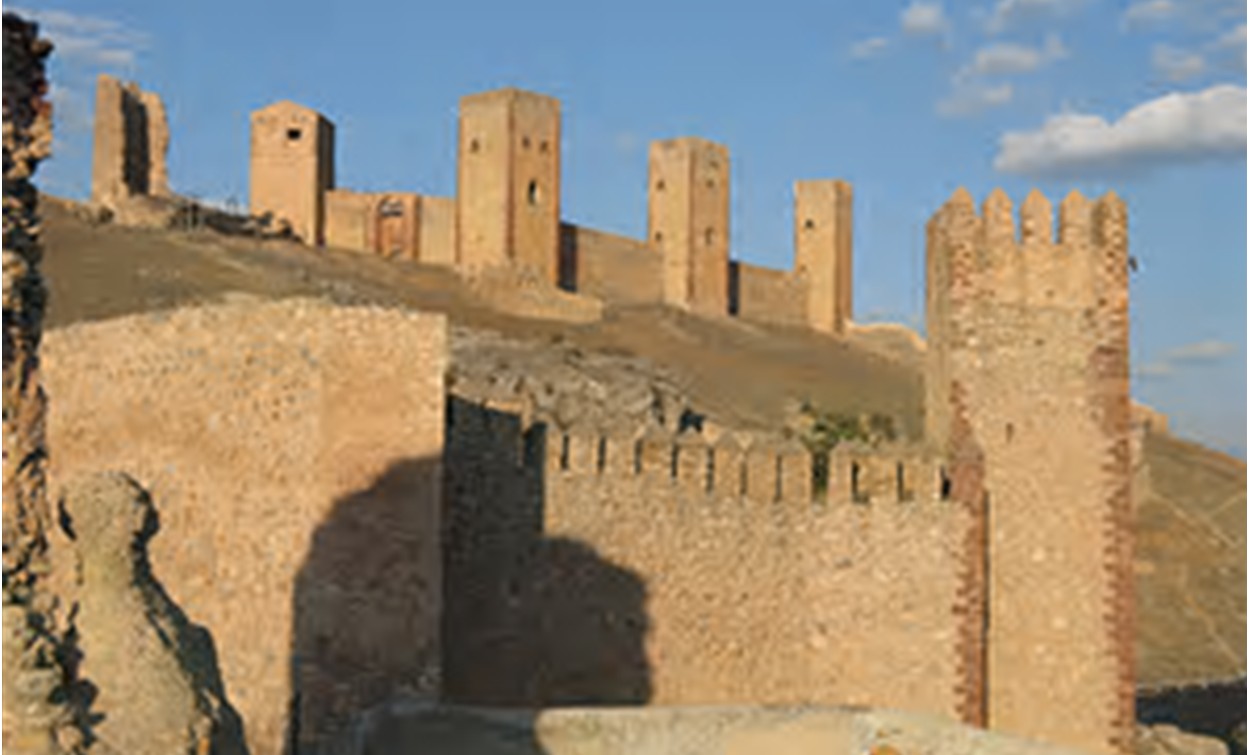 Molina de Aragón is a town with deep historical roots that has been able to conserve its enormous past. Each stone, each bend, each corner is a mute and at the same time living witness to the events that forged their existence.

The River Gallo, tributary of the River Tagus, forms a large sharp sickle-shaped bend, travels down an area of sandstone and has formed huge walls and monoliths. In them, due to the size of the boulders that have been deposited, you can see the different transformations that the river has undergone.

This unique spot is known by the name of Barranco de la Virgen de la Hoz. In the Gothic-Renaissance style church, the living rock forms part of the construction.

When the water turns into a waterfall as the rivers flow, it forms some of the most beautiful scenes in the landscape. 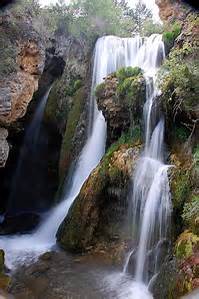 The Salto de Calomarde, in the River Fuente del Berro, is a good example of one of those places where the water turns into a torrent, a view that, even though well known and often visited, still surprises tourists.

The Cañón de la Hoz de Calomarde, until recently a fairly inaccessible place, has now become somewhere you can visit without being specially trained.

The trail runs four kilometres between walkways, the largest of which, fifteen metres, crosses a gorge surrounded by lush vegetation. And, best of all, it is open to everyone. 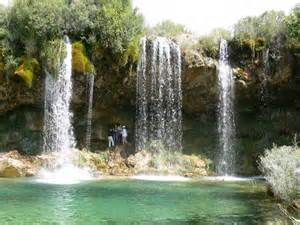 Shortly before reaching El Vallecillo you will find a small bridge, followed by a path, to the left, which will lead you to a small open space where you can leave your vehicle.

A descending trail leaving there will take you to the waterfall of the Molino of San Pedro and a refreshing natural pool. It is a beautiful place where the River Cabriel leaps into the air creating a beautiful waterfall.

The sanctuary of the Virgen del Tremedal dates back to the 18th century and was rebuilt in 1880. It is located in the Montes Universales, a beautiful spot in one of the highest villages of Aragon.

This sanctuary has a beautiful Romanesque carving in pine of the Virgin del Tremedal, from the 13th century. Her pilgrimage is celebrated on the second Sunday in September, as part of the festivities of Orihuela del Tremedal.

Built in 1770, it stands at the top of the hill on which the town sits so it is visible from all around. It is of huge proportions with three naves and a dome on the transept. The slender tower in three sections ends in a capital. In Baroque style its façade is neoclassical. It was declared a Historic-Artistic Site in 1972.

The Castillo de Peracense is a fortress located in the Aragonese village of Peracense, Teruel, Spain. It is one of the most original and best preserved castles in Aragon, as well as one of the most interesting monuments in Teruel from the point of view of its heritage and landscape. What best defines this fortress is that the natural topography of the ground was utilized during its construction

The fortress stands on a rock formation of very steep red sandstone, that constitutes the southern prolongation of Sierra Menera, next to the hill of San Ginés. The erosion of the red sandstone provides a breathtaking view of the sights all around, especially the Valley of Jiloca, located to the NE of the castle.

CHECA, situated in the south-east of the province of Guadalajara, nestled in a valley, flanked by two high hills, the Picorzo and Pedro Maza, and a beautiful pine forest, which is known as La Espineda meadow.

It is geographically situated in the Castilian part of the Iberian mountain range more specifically in the area of contact between the sierra de Albarracín and Serranía de Cuenca. Since 1998 it has formed part of the Nature Park of the Upper Tagus, so its natural wealth of flora and fauna is very diverse and rich. 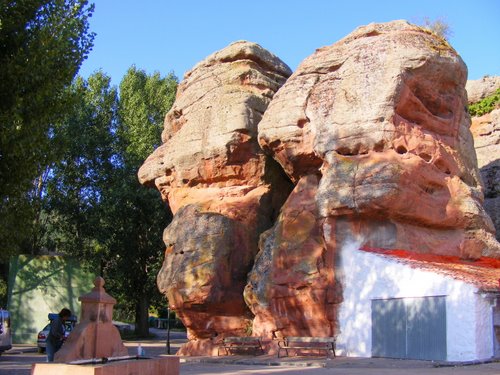 Parking is available close to Checa, at kilometre 19.4 on the Orea – Molina de Aragón road. Located within it is an Experimental Area where a guide will help you to identify the rocks present in the Upper Tagus, the relief that they give rise to and the traditional uses to which they have been put.

In the slate of this area thousands of graptolite fossils can be found.

The tour is 16 kilometres long and leaves from the outskirts of Checa and ends in the town of Chequilla.

Situated in the Upper Tagus Nature Park, it stands out due to its rock formations of red sandstone, being an imitation of a small enchanted city where everyone can enjoy imagining the shapes acquired by its rocks as well as the houses set in them, do not miss a visit to the Church of San Juan as well as the bullring.